The University of Bristol is insisting on pursuing cruel and worthless forced swimming tests using rats. PETA will stop these experiments. Here are our latest actions:

PETA’s “zombies” want to put the final nail in the forced swim test’s coffin. Ahead of Halloween, a mob of PETA supporters dressed as brain-dead zombie scientists swarmed Senate House to urge University of Bristol experimenters to use their brains, ban the cruel and useless forced swim test and other near-drowning experiments on small animals, and embrace modern, non-animal research.

PETA Crashes the Balloon Party With a Giant ‘Rat’

PETA Haunts the University of Bristol With Grim Reapers

Valentine’s Day: PETA Urges University of Bristol to Have a Heart for Animals

PETA ‘Rat’ Gives Out Free Face Masks – With a Message

The Age of Experiments on Animals Is Over

PETA Makes a Splash in Bristol With Drowning Rat Billboard

What Happened at Our Forced Swim Test Virtual Disruptions?

‘Have a Heart This Valentine’s Day’: Universities Urged to Drop Forced Swim Test

Rats Are Forced to Tread Water, Then Killed

In the widely criticised tests, experimenters induce panic in vulnerable small animals such as rats, who may or may not be dosed with a substance, by putting them into inescapable cylinders of water in which they must swim, terrified they will drown. 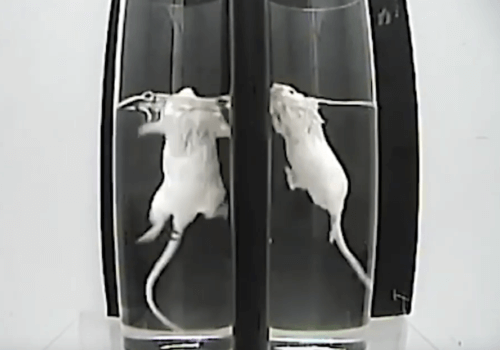 They attempt to climb the steep sides of the container and even dive underwater to look for an escape. This is done under the erroneous assumption it can reveal something about mental health conditions in humans.

Once the test is complete, experimenters kill the animals – either by gassing, blunt force trauma to the head, an overdose of anaesthetic, or breaking their necks – to study their brains.

Rats Need YOU! Join the Campaign

University of Bristol experimenters must drop these dead-end experiments. When we ask, they listen. Join our campaign and help us keep the pressure on!