ZSL London Zoo’s trio of tiger cubs have had their visit from the Zoo’s veterinarians, who were finally able to confirm the sexes of the stripy babies – two males and a female!

ZSL veterinarian Dr Ellie Milnes gave each cub a thorough nose-to-tail examination, checking their eyes, teeth, heart, and overall physical health as well as weighing each cub. All three were given a clean bill of health, and their information added to the Zoological Information Management System (ZIMS), a database shared with zoos all over the world that helps zookeepers and conservationists to compare important information on thousands of endangered species.

The milestone appointment took place in the comfort of the cubs’ home, with mum Gaysha waiting outside in the paddock, while their vital statistics were recorded and their important first vaccinations were administered.

Facing a scenario that many parents of youngsters are familiar with, zookeepers have a job and a half to do in keeping the wriggling and hissing cubs still for their first vaccinations. Unlike human babies though, the cubs already have sharp claws and feisty personalities to contend with. 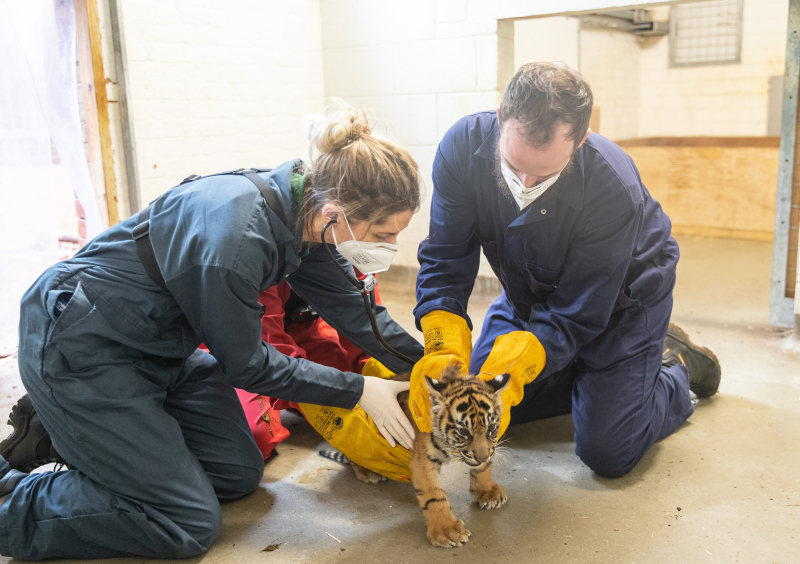 Zookeeper Lucy Reed said: “It’s not very often we are ‘hands on’ with the animals we look after – in fact most of the time we do the complete opposite – so I was very excited to get to help hold the cubs, it’s a huge privilege.

“However, I think it’s safe to say the cubs didn’t feel the same way – they’re super strong already and holding them still for their injections felt like doing a mega workout. It’s a really encouraging sign though, as all the fidgeting and hisses are a completely instinctive behaviour and something we want to see them doing!” 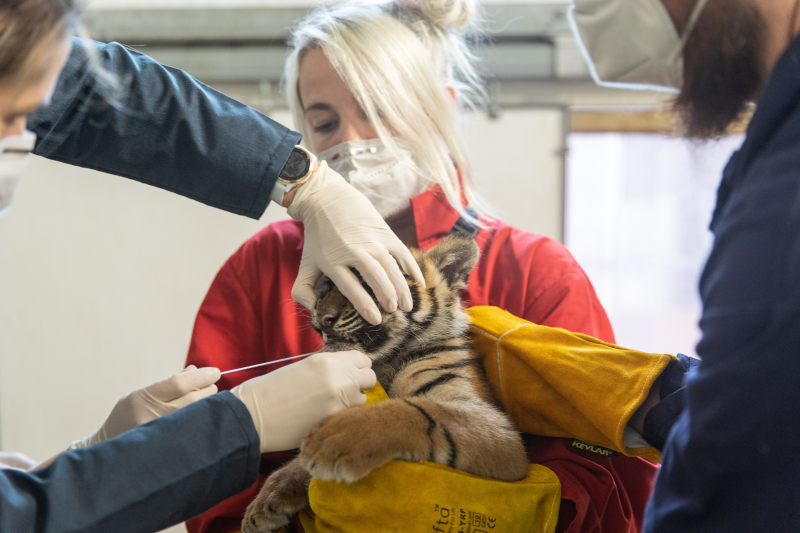 Weighing in at a respectable 9.3kg, 8.25kg (the two males) and 6.7kg (the female), the cubs were also fitted with a microchip during the health check – just like those given to pet cats and dogs – which ensures each one can be easily and accurately identified as they grow and their details added to the records for the global breeding programme for the species, in which they’ll play a significant role in the future.

Dr Ellie Milnes added: “This first health check is really important for the cubs, not only is it a chance for us to really investigate how they’re doing and how well they’re growing, but their first vaccinations help to boost their young immune system and keep them healthy and well. “It gives us great pleasure to say we have three healthy – and super strong – cubs in our care.”

Now that their sexes are confirmed, the cubs will be named by supporters of ZSL’s (the conservation charity which runs London Zoo) global wildlife projects after the charity’s annual fundraising gala Safari in the City this evening (21 September 2022).

Book a visit now to see the cubs and support ZSL London Zoo at www.zsl.org/london