Billions of native wild animals are terrorized, maimed, mauled, and killed by cats every year. Birds, squirrels, chipmunks, rabbits, opossums, mice, rats, moles, and countless others who are simply inhabiting their own home—their natural habitat, the only place they know, and the place where they belong—shouldn’t have to contend with free-roaming cats.

There’s Nothing Natural About Trap-Neuter-Release

Homeless, unsocializable cats are domesticated and genetically identical to the cats who share our homes. They are no more equipped to withstand the world’s threats than our own cats are. Homelessness is unnatural for these animals—and no domestic animal should be left in such a vulnerable position. Yet “natural attrition” is the euphemism used to describe the deaths of free-roaming cats by proponents of TNR and others who think cats should be left outdoors to fend for themselves.

PETA’s fieldworkers and shelter staff see “natural attrition” firsthand—almost daily—and there’s nothing humane about it. We regularly come to the aid of “outdoor cats” found with their eyeballs hanging out of their sockets, eyes and noses crusted shut from untreated upper respiratory infections, tails or legs degloved (stripped of skin) as a result of attacks by other animals, or ears turned into a bloody pulp from scratching at maddening ear mites—as well as cats wasting away due to feline AIDS, leukemia, or other deadly diseases. Painless euthanasia is not the worst thing that can happen to these cats. 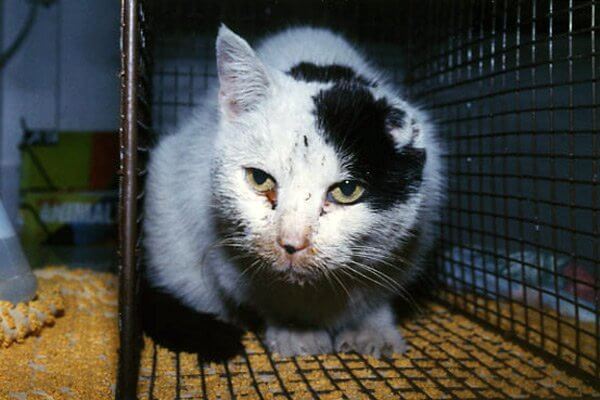 The vast majority of free-roaming cats haven’t been subjected to TNR—they’re friendly, social animals who are simply fed and allowed to reproduce. Not only are such cats adoptable, they may also be someone’s lost companion.

In a disturbing new trend that exacerbates this situation, many animal shelters are refusing to take in cats—even kittens—and are telling people to let them fend for themselves (and therefore reproduce and kill native wildlife). Some shelters are even going so far as to engage in TNR themselves. Why? It’s all about making the shelters’ statistics (“save rates”) look good.

Open-admission shelters that provide lost animals with safe harbor are their best chance at being reunited with their guardians—who may be frantically searching for them—or finding another safe, loving indoor home.

Free-roaming cats have caused the extinction of at least 60 species globally—40 species of birds and 20 species of mammals. And that grim figure makes sense when you do the math: Studies have found that one roaming cat kills an estimated 100 animals every year. Multiply that by the number of cats roaming around and you’ll get billions of victims—and they don’t all die quickly. Cats are known to enjoy “playing” with their prey, and they can spread potentially fatal diseases to wildlife.

It’s not about you. TNR makes humans, not cats—and certainly not wildlife—feel better, convincing themselves that they’re doing good. That’s speciesism. Just as you can’t be a meat-eating environmentalist, if you care about animals, you can’t logically support leaving cats outdoors to roam or dumping them on the streets through trap-neuter-release programs. Life on the streets is no life at all for cats—and for the wildlife they hurt and kill, it’s a death sentence. If TNR were working, there would be far fewer cats suffering without homes.

We must address feline homelessness at its roots by requiring that all cats be spayed or neutered, vaccinated, licensed, microchipped, and kept indoors.

Learn More About This Important Issue