It’s November 15, 2018. A small marmoset monkey named Xena lies limply on a sterile metal table in Agnès Lacreuse’s laboratory at the University of Massachusetts–Amherst (UMass). An experimenter looms over Xena, carving the first incision into the delicate skin of her abdomen. Blood beads at the surface of the cut, forming an angry red slash. It’s only the beginning of a nearly two-hour, highly invasive surgery.

Xena’s medical records will document this unwarranted invasion of her body, each step described in dispassionate technical terms:

By the time Xena wakes, her insides will be threaded with electrode leads, hijacked by experimenters for curiosity-driven tests. They will have taken her body just as they took her autonomy—and will one day take her life.

How did she get here?

Xena was born at a South African breeding facility for Worldwide Primates on December 30, 2014—just days before the new year. But the promise of a new beginning for some was of no help to her, because she was born into an industry that was stuck in the past—the violent, money-hungry world of animal experimentation.

Shortly before her second birthday, workers stuffed Xena into a cramped crate with other frightened, disoriented monkeys to be flown around the world to another Worldwide Primates facility in Florida. Like thousands of other monkeys packed into the cargo holds of planes every year to satisfy experimenters’ insatiable hunger for victims, she would have been forced to languish in her own feces and urine during the long journey, engulfed by darkness and her fellow captives’ shrieks of fear.

Known by her captors at the dismal Florida facility as #648, Xena was warehoused like a spare part with a serial number alongside hundreds of other monkeys for more than a year. And like a spare part, she was eventually boxed up (again) for shipment—this time to UMass, where she’s been imprisoned ever since.

In nature, a marmoset’s forest habitat is a kaleidoscope of sights, sounds, and smells: rustling, shimmering leaves to frolic among; troopmates to groom and tussle with; insects and tree sap to devour. But at UMass, Xena’s entire world is restricted to just one cramped steel cage under harsh fluorescent lighting. She can leave her bleak prison cell only when experimenters allow it—and even then, it’s only for another painful, frightening procedure or cruel test.

Deprived of the complex network of friends and family with whom she would spend her days in nature, Xena was given only one companion in her small cage, a male marmoset named Jolly. For her first month at UMass, contact with even one other member of her species was impossible, as she was held in solitary confinement.

Sedations and Surgeries, One After Another

In October 2018, experimenters pulled Xena from her cage and restrained her on her back on a metal operating table. They cut into her abdomen to remove her uterus and ovaries, leaving a wound that was painful and itchy. For days after the surgery, she scratched and picked at the incision, but her captors did nothing to prevent her from tearing out the stitches. When the wound burst open, she had to be sedated yet again so experimenters could mend it—a frightening and disorienting experience for any animal.

Not even two weeks had passed before Xena was on the operating table yet again. Experimenters opened up her abdomen and permanently anchored a transmitter device into the delicate tissue with wires. They made another cut at the base of her neck and threaded four electrode leads beneath the skin from the transmitter to the space between her shoulder blades, affixing two of the wires directly to the exposed muscle. 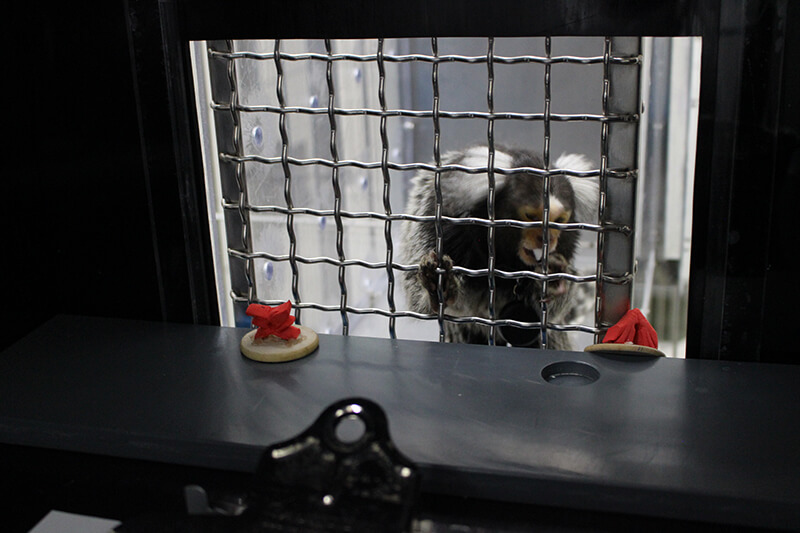 The surgery—performed not for Xena’s health but so that experimenters could use her as living laboratory equipment for their curiosity-fueled tests—would have been astoundingly invasive even if experimenters had stopped there. But they kept going.

They turned Xena onto her stomach and immobilized her head in a metal stereotaxic frame, then cut through the delicate skin on top of her head to expose her skull. With a high-speed drill, they bored into the bone, creating holes for two additional electrodes. To these electrodes, they attached the remaining electrode leads, which they’d threaded from her shoulders to her head beneath the skin. Then they tightened the screws embedded in her skull and fixed them in place with dental cement. Finally, after a nearly two-hour operation, they were finished.

When Xena woke up, she was groggy and clumsy from the anesthesia. Her skin was bare where experimenters had shaven it for surgery, the lack of fur accentuating her freshly sewn wounds and leaving her vulnerable to the cold. On November 19, four days after the procedure, experimenters noticed that she was shivering inside her cage and that the incisions on her head and abdomen were irritated from scratching. They would take weeks to heal.

The Crushing Toll of Captivity

Even when marmosets’ bodies aren’t put under the strain of invasive surgery, captivity often devastates their health. Many wither away and die for no apparent reason, a phenomenon so commonly reported in the species that it has its own name: marmoset wasting syndrome. Others, like Xena, manage to survive in the impoverished conditions only to sustain numerous injuries caused by rough handling or a stressed, frustrated monkey in a neighboring cage.

By the time Xena was 2 years old, when she should have been in the youthful prime of health, workers at the Worldwide Primates facility in Florida noticed that she was already suffering from ankylosis (abnormal stiffening and immobility) in her tail—likely the lasting result of a previous trauma. Later, in Lacreuse’s laboratory, rough handling during capture from her cage sometimes left her wounded and bleeding. Once, her mouth hit a hard surface with such force that her gums bled. On another occasion, her canine tooth snagged a handler’s glove and came loose—leaving a bloody wound that experimenters tried and failed to suture. 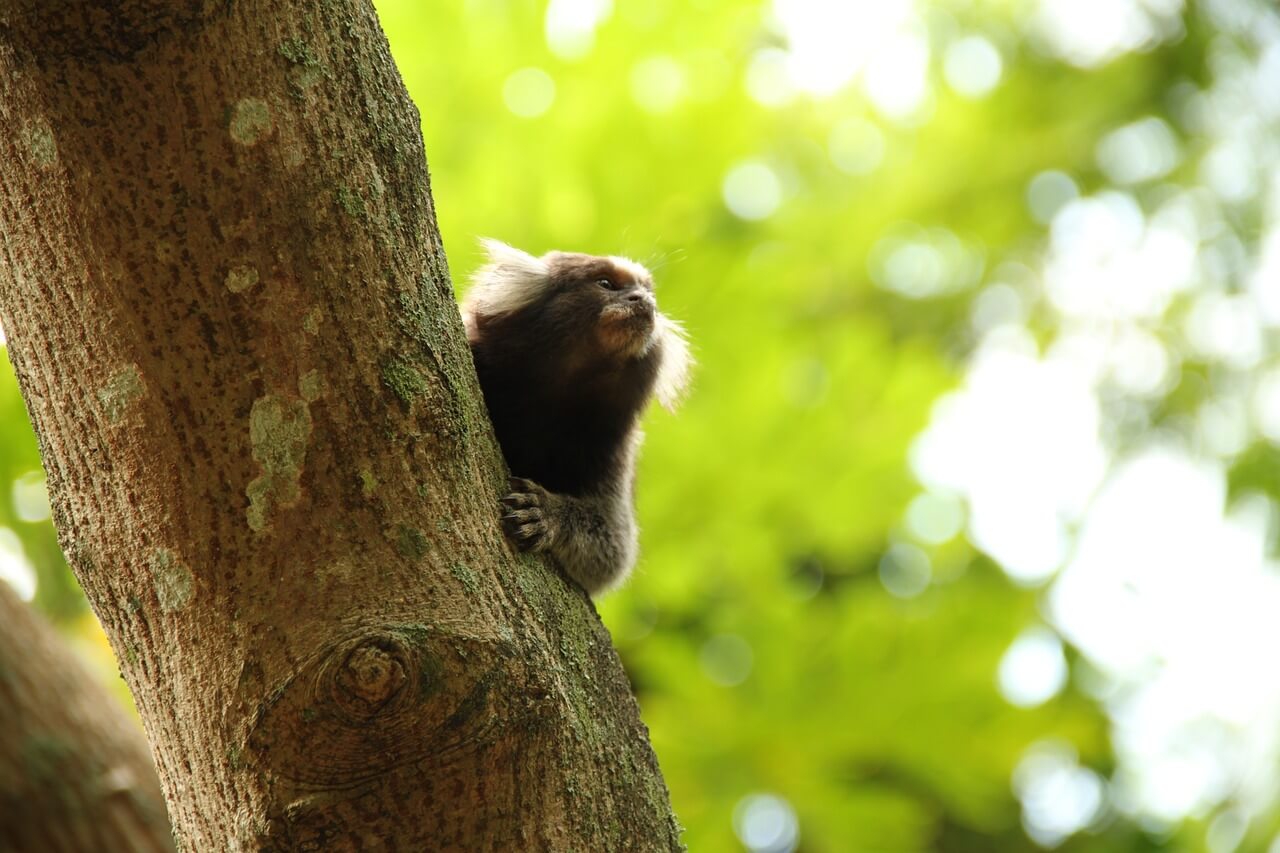 From the moment she was born, Xena has been a prisoner—deprived of the exhilarating freedom of the forest, lifelong family bonds, and everything else that’s natural and important to her. Her days have been a stream of constant confinement, bewildering tests, and painful procedures. Every moment of her existence has been under someone else’s control.

Not one more small, vulnerable marmoset should be forced to endure a life like this. Demand that UMass end the torment of Xena and her fellow prisoners in Lacreuse’s laboratory today.