SAN DIEGO (Oct. 3, 2022) – For more than two decades, conservationists from San Diego Wildlife Alliance have been waiting with anticipation as they watched for the slightest signs of breeding from a rare reptile species. This summer, their patience paid off after wildlife care team members at the San Diego Zoo welcomed 41 tiny Indian narrow-headed softshell turtle hatchlings—becoming the first accredited conservation organization in North America to hatch these endangered turtles, and furthering the organization’s ongoing work to save this vital Asian species.

Three narrow-headed softshell turtles have been living at the Zoo for more than 20 years, and wildlife care specialists have spent the majority of that time closely monitoring the group for any indication that breeding has taken place. This is an extremely prolonged process as the turtles can take close to 10 years to even reach sexual maturity. Also, the reptiles usually lay their eggs overnight and cover them with dirt—adding to the difficulty of locating a nest.

This summer, wildlife team members were elated when they discovered, for the first time, two nests containing 41 eggs. While a few of the turtles were hatched in the reptiles’ habitat, the team carefully removed the other eggs and placed them in an artificial nest incubator. Doing so provided an environment where team members could help maintain the optimal temperatures and humidity for hatchings—increasing their chance of survival. Eventually, their diligence paid off, as a new generation of healthy narrow-headed softshell turtles emerged from the eggs. 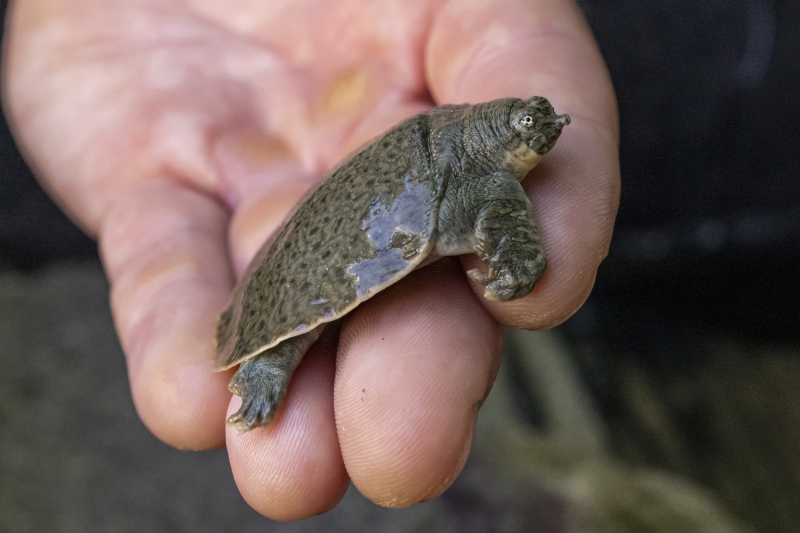 “This is a thrilling moment for us at the San Diego Zoo, and an incredible step forward in the conservation of this species,” said Kim Gray, curator of herpetology and ichthyology at the San Diego Zoo. “We have been focused on caring for these turtles for a very long time, and part of that care is to gain a greater understanding of the species’ natural history. With the knowledge we gain here at the Zoo, we can better assist our partners in India to help this essential species thrive in their native habitat.”

“These turtles are higher-level predators within their native ranges,” said Gray. “If they are thriving, that means the river habitats where they live are healthy and can support other species. And that includes humans, as some local communities depend on the same water source used by the turtles.”

The species is currently listed as Endangered on the International Union for Conservation of Nature (IUCN) Red List of Threatened Species. The international pet trade, human harvesting for food, environmental pollution and destruction of sand-bar habitats has significantly reduced their population. Scientists are now trying to determine the exact number of individuals remaining. San Diego Zoo Wildlife Alliance has worked with the Turtle Survival Alliance (TSA), particularly the organization’s presence in India, to help host wetlands workshops that educate local communities about the interconnectedness between the health of native wetlands and rivers, and the well-being of local human populations.

“Our work with TSA India really highlights the long-term partnerships needed to help save irreplaceable species such as these turtles,” said Nadine Lamberski, DVM, chief conservation and wildlife health officer at San Diego Zoo Wildlife Alliance. “As with all wildlife, this is a unique species with an amazing and important story to tell. Our fundamental mission at San Diego Zoo Wildlife Alliance is to be their voice and tell that narrative.”