PETA Latino has achieved major victories for animals in the years since its launch in 2013. As PETA’s outreach division for Spanish-speaking communities in the U.S. and Latin America, the group’s focus is on putting animal rights on the Latino community’s map. PETA Latino’s outreach and its work to champion animal rights have made a huge difference by sharing information with people and encouraging them to have empathy and compassion for animals.

Here are just a few examples of the work PETA Latino has done for animals:

Thanks to PETA Latino’s work with local animal rights group Animal Heroes, letters from celebrities and experts, and 50,000 petition signatures, the Mexican state of Quintana Roo banned wildlife exhibitions in public areas. The victory garnered tons of media coverage, bringing worldwide attention to the issues that come with using wildlife for entertainment.

As part of a PETA-wide campaign to persuade Forever 21 to drop wool, PETA Latino has given the company’s Mexico Instagram account a run for its money. The group and its supporters inundated the account’s posts with #DropTheWool comments, forcing the brand to disable comments for several years.

Millions Take Action for Lolita the Orca, Thanks to PETA Latino’s Efforts

PETA Latino gathered over half a million signatures, worked with important Latine celebrities, and hosted countless demonstrations in behalf of Lolita, an orca who has been held captive at the Miami Seaquarium for more than five decades. As a result of persistent action, she is no longer forced to perform, and the group will continue working to have her released into a reputable sanctuary.

PETA Latino’s first-ever demonstrations in Colombia were a tremendous success. In addition to receiving local media coverage, the group reached 3.5 million people in the country on Facebook—7% of the population—following the demonstrations.

Amid the War in Ukraine, PETA Latino Helps Mexican Citizens Return Home With Their Animal Companions

After reading in the news that the Mexican government wouldn’t include animal companions in its evacuation plans from Ukraine, PETA Latino sent a letter to Foreign Relations Secretary Marcelo Luis Ebrard Casaubón asking that the government reconsider. Not long after the letter was published in several well-respected media outlets, the government announced that Mexican citizens could bring their animal companions with them.

PETA Latino’s campaign for dogs confined to rooftops has given community members guidance on what actions to take if they witness this scenario as well as information on the dangers of leaving dogs outside and how important it is for them to be taken inside and cared for as a member of the family. Thousands have pledged never to leave their dogs outdoors.

Thanks to lobbying on the ground by Animal Heroes and other local animal protection groups as well as a petition signed by many of PETA Latino’s supporters, the governor of Quintana Roo signed into law a ban on cockfights and bullfights in 2019. As a result of this legislation, bulls, dogs, roosters, and other animals will no longer be chained, caged, beaten, drugged, or fought to the death in the state.

PETA Latino has hosted two annual spay-a-thons in Cancún. The event held in 2022 was the group’s largest to date, with 644 local dogs and cats spayed or neutered over the course of five days. Attendees were also provided with complimentary meat-free meals, goodies, and vegan starter kits. 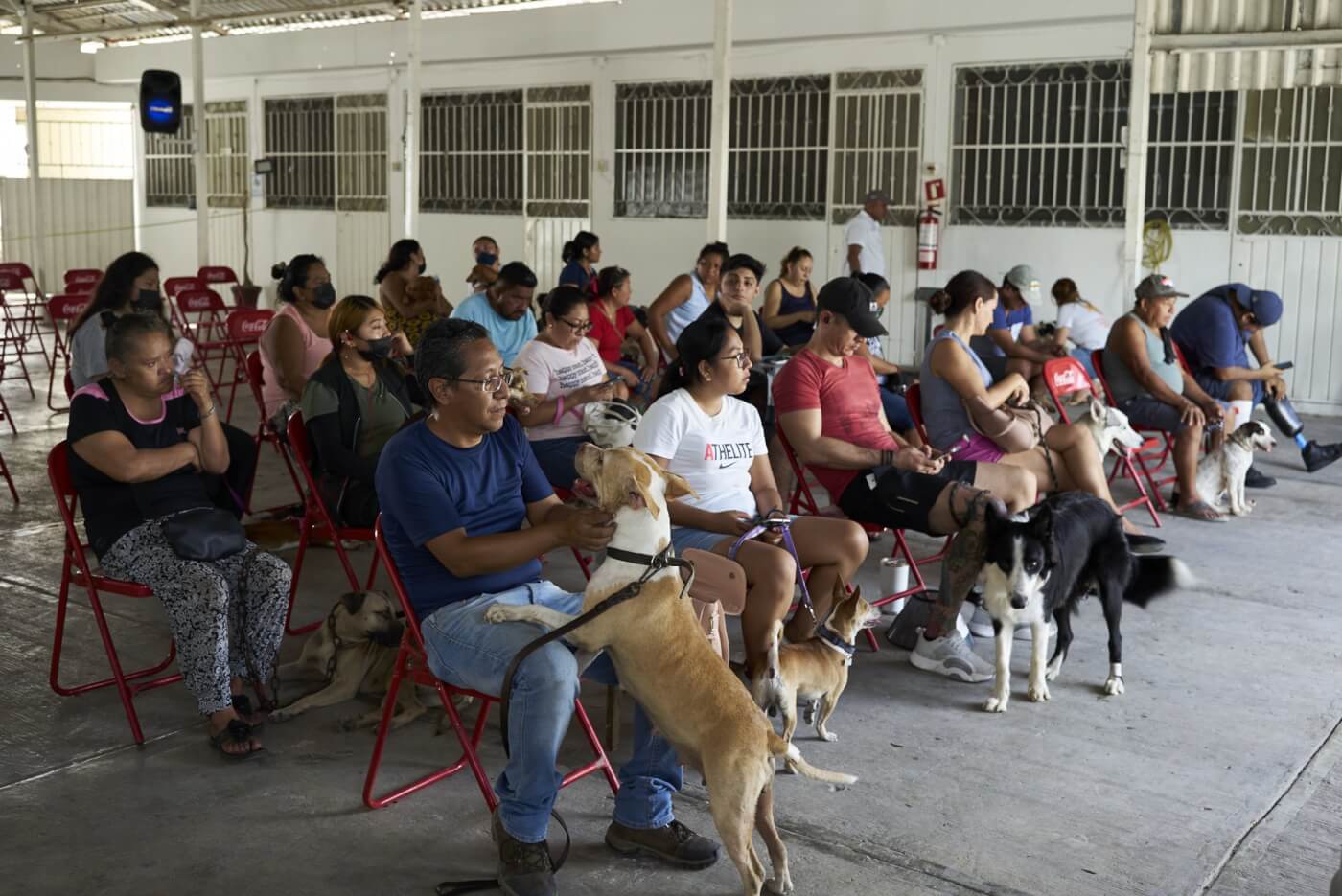 PETA Latino has worked with many celebrities to promote animal rights campaigns, including Andrea Meza, Ana Bárbara, Sherlyn, Kate del Castillo, Jesse & Joy, George Lopez, and Miguel Bernardeau. They’ve all attracted attention from the media and had a major impact on animals’ lives by reaching thousands of their followers and teaching them about having empathy and compassion for animals.

In 2019, PETA Latino and its supporters took to the streets in Mexico City and Bogotá, Colombia, to urge Forever 21 to stop selling wool. The campaign and its related demonstrations attracted tons of media coverage, helping to make many aware of how sheep are exploited for their wool.

For several years, PETA Latino has hosted vegan Nochebuena giveaways on the biggest Latine holiday of the year on the streets of major cities such as Bogotá, Chicago, Guadalajara, Mexico City, Miami, and Phoenix. Passersby enjoyed a gift of delicious vegan meats and were encouraged to choose animal-friendly options for their Nochebuena dinner table, and thousands of signatures were collected. 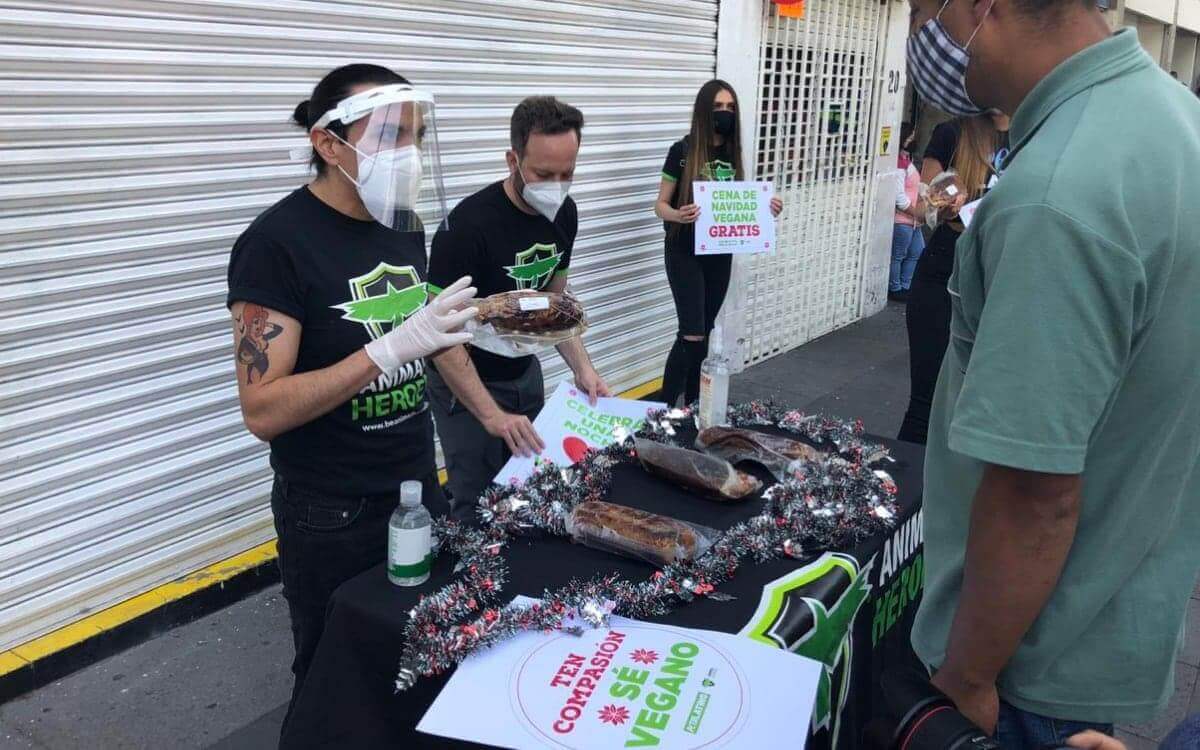 PETA Latino put up a billboard in Monterrey, the most industrial city in Mexico, asking kids not to eat pigs for Christmas, just as they wouldn’t eat their dogs. The ad generated massive discussion after some people asked the governor of the state to take it down. 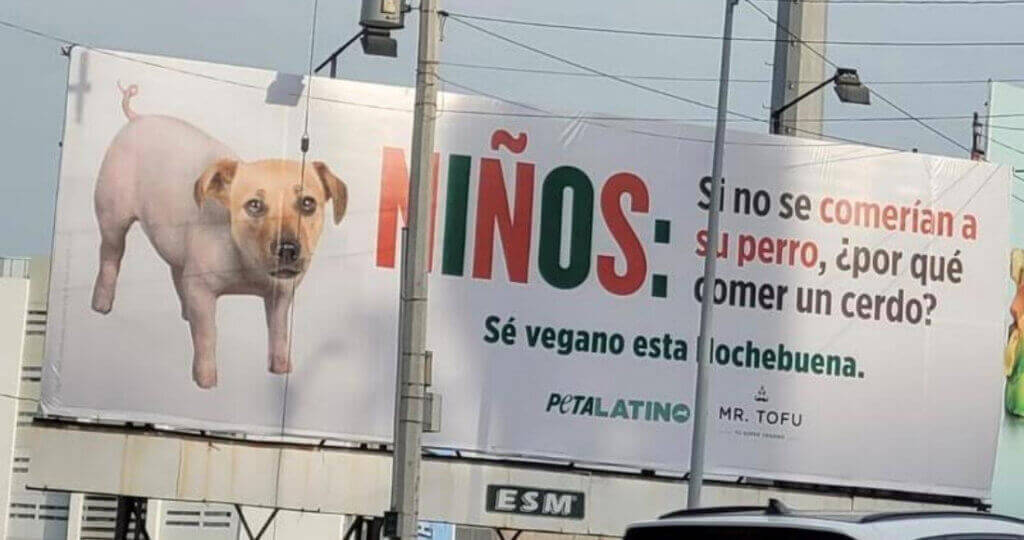 Another PETA Latino billboard in southern Mexico showed support for the Maya communities fighting against industrial farms that threaten their water and soil.

Recognizing the actions of activists and others who make a difference for animals is an important part of PETA Latino’s work. Awards have been given to individuals such as Hilario Aguilar, who rescued a dog from a mountaintop, and Andrea Padilla, a Colombian senator dedicated to animal rights.

A Mexican federal judge issued an injunction temporarily banning barbaric and bloody bullfighting in Mexico City, where the world’s largest bullfighting arena is located—another step toward a total ban throughout the country.

Want to keep up with PETA Latino’s vital work as well as help animals? Join the PETA Latino Activist Network and E-News list to receive information about how to get involved in your community, along with breaking news, alerts for urgent action, and more:

And don’t forget to follow PETA Latino on social media: