Four little hooves and all ears! The Zoo’s baby boom continues with the arrival of a male okapi calf born to first-time mom, Kayin, as part of an AZA breeding program for this endangered species.

The Oklahoma City Zoo and Botanical Garden is celebrating the birth of a rare, endangered okapi (pronounced oh-COP-ee) calf born on Wednesday, September 7 at 3:42 a.m. in the OKC Zoo’s okapi barn. The male calf is the first offspring born to mother, Kayin, 6, and father, Bosomi, 4, and the seventh okapi calf born at the Zoo. The last okapi born at the OKC Zoo was Kayin in 2015. 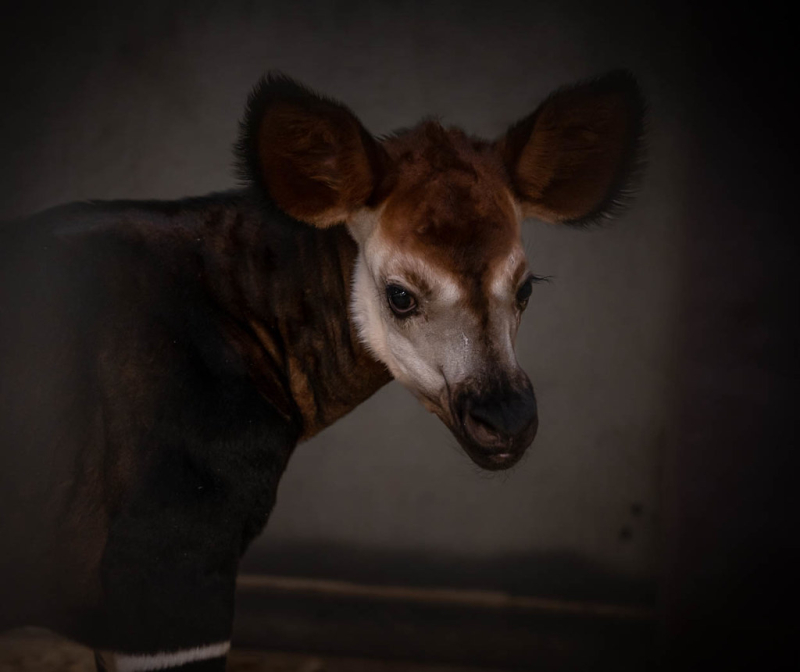 “We are overjoyed about the arrival of Kayin’s first calf and welcoming this new generation to our okapi family,” said Tracey Dolphin, OKC Zoo’s curator of hoofstock and primates. “Kayin is being a very attentive first-time mother and demonstrating exceptional maternal care. Her new calf is healthy and strong, and meeting his milestones including nursing and bonding with mom.” 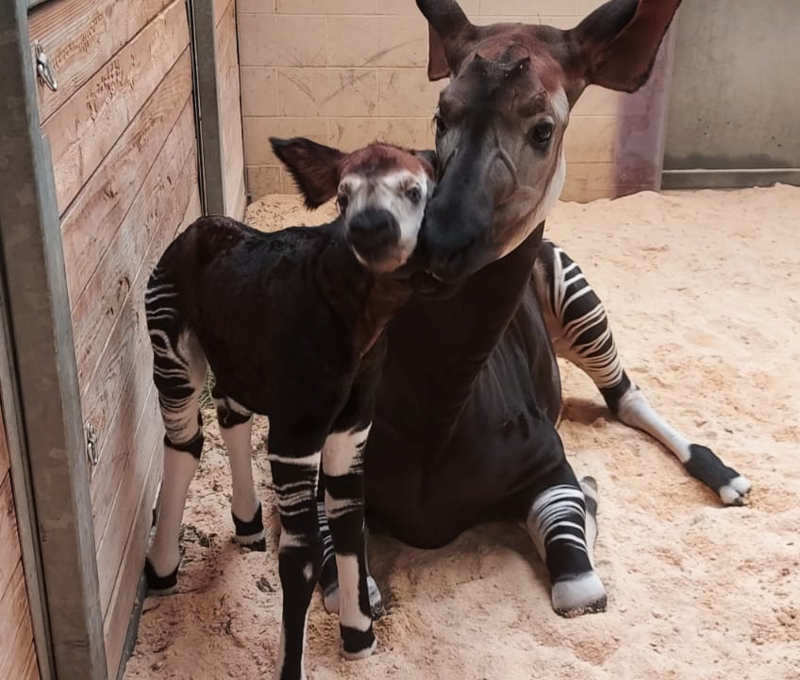 Okapis have been part of the OKC Zoo’s animal family since 1973. To date, there are approximately 88 okapis being cared for among 29 Association of Zoos and Aquariums (AZA)-accredited members in North America making every successful okapi birth a significant occasion. The OKC Zoo participates in the AZA’s Species Survival Plan®(SSP) for okapi which made the breeding recommendation for Kayin and Bosomi. By participating in this program, the Zoo is contributing to the conservation of this species and helping ensure the sustainability of okapi populations for future generations. 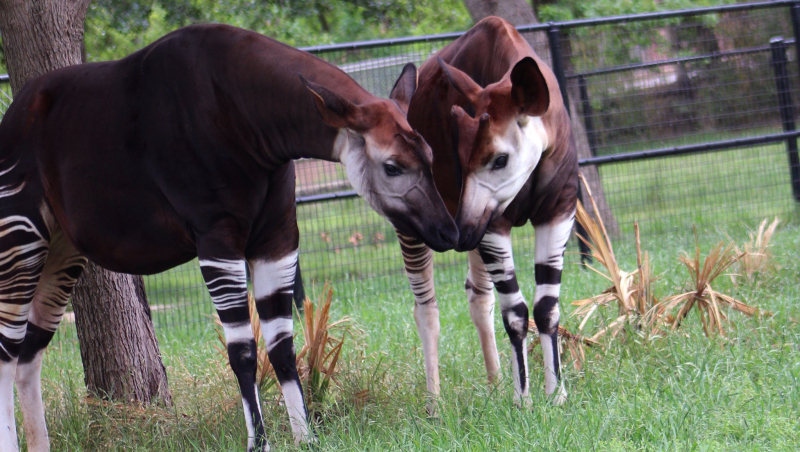 Both Kayin and her offspring are in good health and enjoying quality time together off public view. The Zoo’s veterinary care team performed a wellness exam on the not-yet-named calf checking his overall body condition, vitals and obtaining his weight, nearly 57 pounds. Caretakers shared that Kayin’s calf was standing and nursing an hour after being born both crucial occurrences for a newborn calf. Kayin’s calf will remain behind-the-scenes at the okapi barn as he enters a “nesting” phase for several weeks. Okapi calves will nest in vegetation conserving their energy, primarily only nursing and sleeping. Guests will able to see Bosomi at the okapi habitat and the Zoo will continue to share updates about Kayin and her calf on its social channels.

Kayin was born at the OKC Zoo in 2015. The calf’s father, Bosomi, arrived at the Zoo on a recommendation with the AZA’s SSP for okapi from Sedgwick County Zoo, Wichita, Kansas, in 2020.

Native to the Democratic Republic of the Congo in central Africa, okapis are a reclusive species often referred to as the “ghosts of the forests”. These unique animals have distinguishing physical features including a velvet-like brown coat, striped legs and hind quarters and enlarged ears. Plus, the okapi is the only living relative of the giraffe. Classified as endangered by the International Union for the Conservation of Nature, okapi populations in the wild – estimated between 10,000 and 50,000 – are currently decreasing primarily because of habitat loss resulting from logging and human settlement. The presence of illegal armed groups around protected areas and poaching are also major threats.

Wildlife fans can support okapi conservation by donating their used electronic devices at the OKC Zoo year-round. Small electronics frequently contain coltan and mining for this substance threatens the habitats of okapi and other endangered species. When individuals donate used phones or other electronics, the coltan from those devices is re-used and reduces the need to mine for the compound in okapi habitats. Additionally, guests can also choose to Round Up for Conservation, when purchasing items from gift shops or restaurants, located throughout the Zoo. Funds from Round Up for Conservation has been donated to the Okapi Conservation Project to help support the organization’s conservation efforts in Africa.

It’s big excitement at the OKC Zoo with the arrival of this little one and recently born Sumatran tiger twins, Luna and Bob, now on public view at Cat Forest. The Oklahoma City Zoo is open from 9 a.m. to 5 p.m. daily with the last entry no later than 4 p.m. Connect to wildlife and tons of fun as you experience BRICKLIVE Animal Paradise at the OKC Zoo. Sponsored by Devon, BRICKLIVE features 45+ life-sized animal statues made with almost two million toy bricks! BRICKLIVE Animal Paradise is open daily during regular Zoo hours through Sunday, October 30. Purchase advance tickets for general Zoo admission and BRICKLIVE at www.okczoo.org/tickets. Membership has its perks! As a member of the Oklahoma City Zoo, enjoy free admission all year-long, plus many additional benefits and discounts. You will also be supporting the Zoo’s animal family, education programming and conservation initiatives. Join or renew today at www.okczoo.org/membership.

Located at the crossroads of I-44 and I-35, the OKC Zoo is a proud member of the Association of Zoos and Aquariums, the American Alliance of Museums, Oklahoma City’s Adventure District and an Adventure Road partner. Regular admission is $12 for adults and $9 for children ages 3-11 and seniors ages 65 and over. Children two and under are admitted free. Stay connected with the Zoo on Facebook, Twitter, Instagram, Linktree and TikTok, and by visiting our blog stories. To learn more about Zoo happenings, call (405) 424-3344 or visit okczoo.org.