The Miami Seaquarium has a history of animal deaths and troubling animal welfare issues reaching beyond its poor treatment of the lone orca Lolita, who has been confined to a small, shallow, barren concrete tank for the past five decades. In July 2021, the U.S. Department of Agriculture (USDA) inspected the notorious facility. The inspection resulted in multiple citations for troubling animal welfare concerns that violated federal law.

Seeking to obtain all documents related to this damning inspection and bring the information to light, PETA submitted a Freedom of Information Act request last year. We recently received more than 100 documents, photos, and videos in response and are releasing our findings to the public. These materials highlight egregious oversights by Miami Seaquarium staff and expose the suffering endured by animals there.

1. Animals Were Underfed as Punishment

Daily training reports from the facility, including the one pictured below, indicate that trainers repeatedly withheld food from animals they felt exhibited poor behavior.

2. The Facility Was in Disrepair

PETA received images that document the poor quality of the animal enclosures and the Seaquarium as a whole. The image below shows a seal kept inside an enclosure crudely held together with plastic cable ties (i.e., zip-ties). 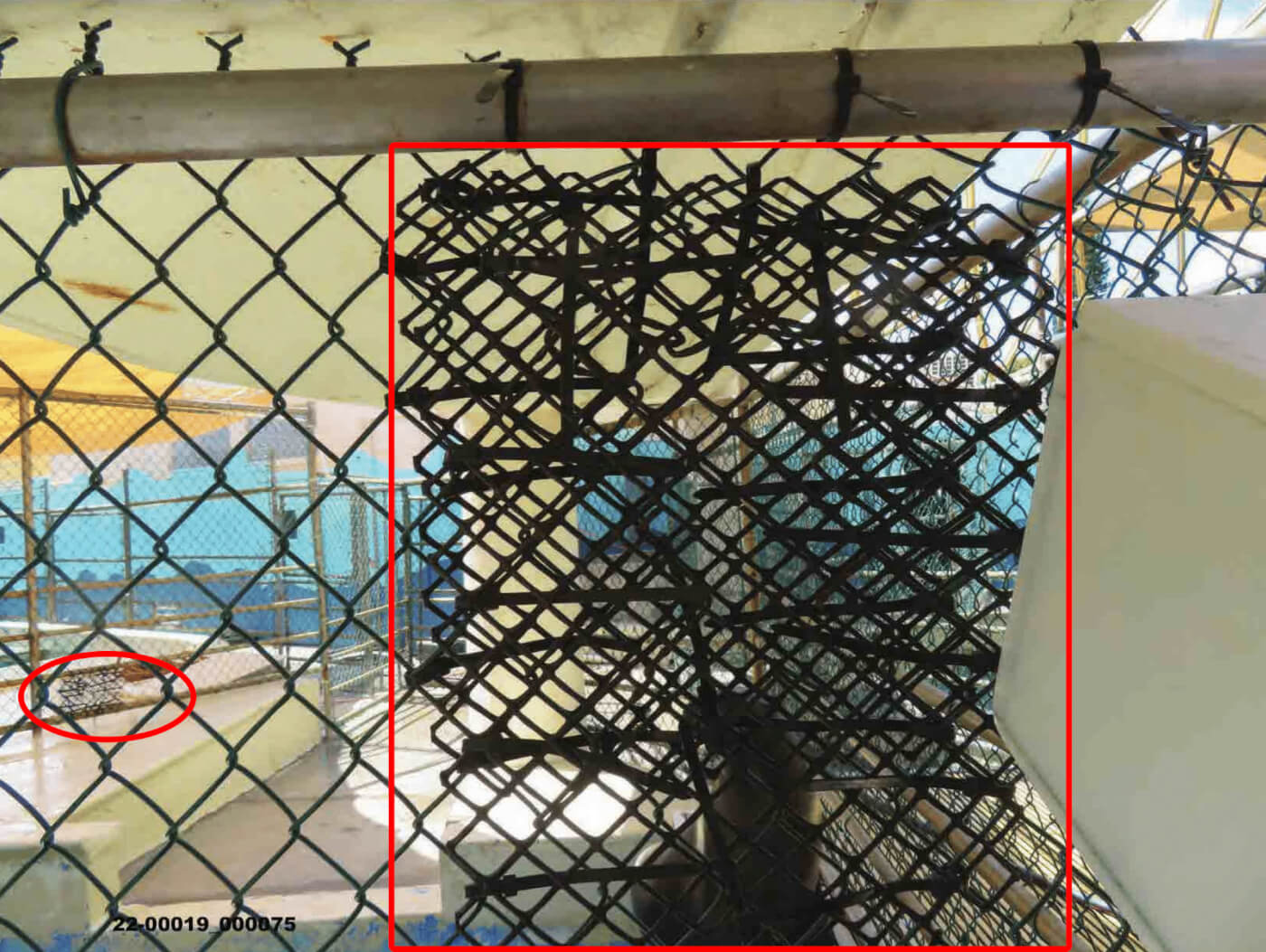 Enclosures, including the dolphin tank pictured below, had areas where broken concrete was plainly visible, posing a risk to both staff members and animals. 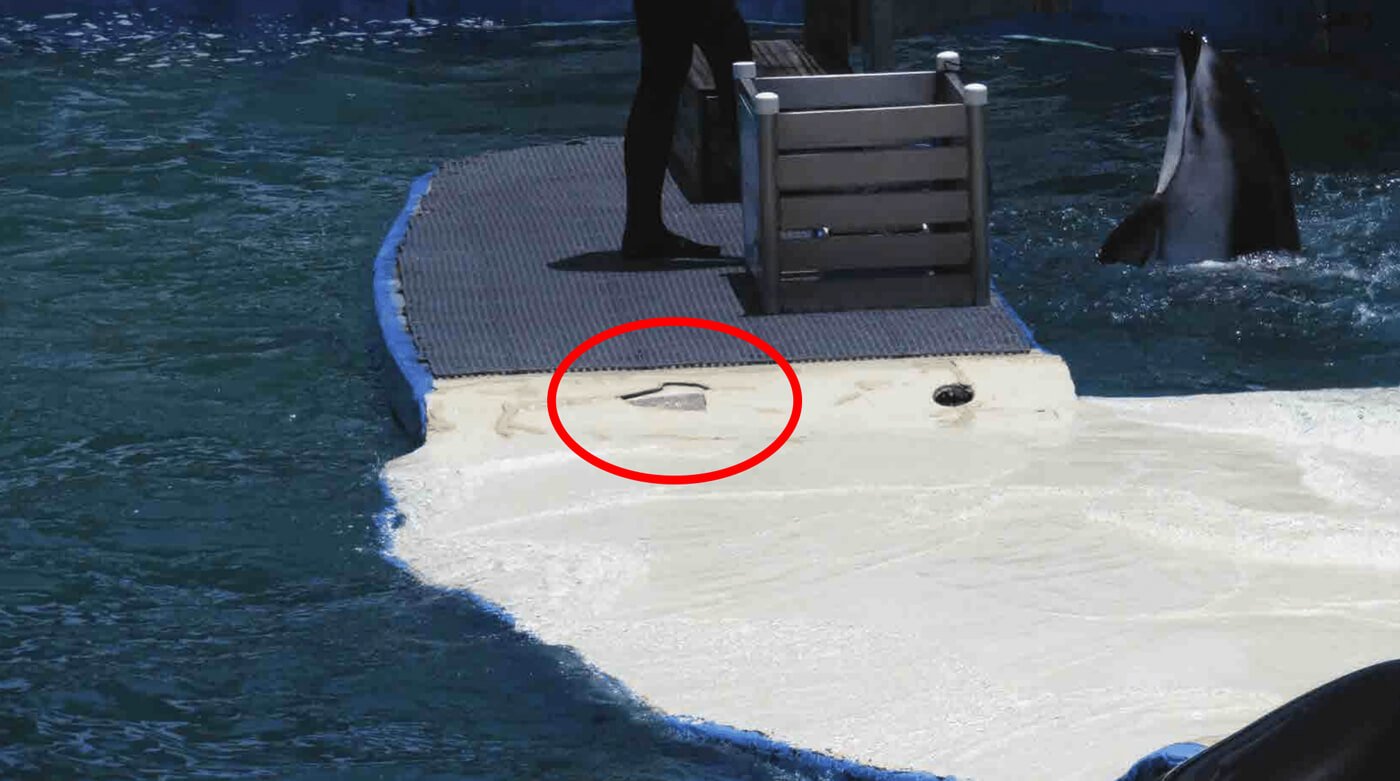 In 2020, a 19-year-old male bottlenose dolphin named Abaco drowned after his rostrum (a dolphin’s snout) got caught in the fence of an enclosure. 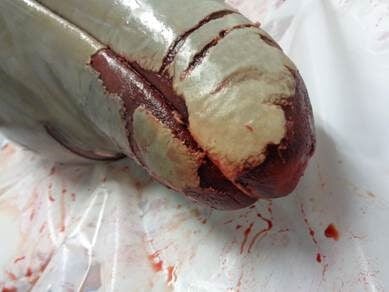 3. Dolphins Attacked Each Other at the Miami Seaquarium

The documents obtained by PETA provide a detailed account of incidents in which dolphins attacked each other at the facility. The stress of being kept in tight confinement near incompatible animals may lead to aggression, and the crude, makeshift barriers between pools fail to keep the animals secure.

Notes from on-site veterinarians and trainers document the injuries sustained by animals, their behavioral changes, and the reduced amount of food they received as punishment.

The photo below shows Pacific white-sided dolphin Lii jumping from the water as orca Lolita, seen at her tail, aggressively chases her. 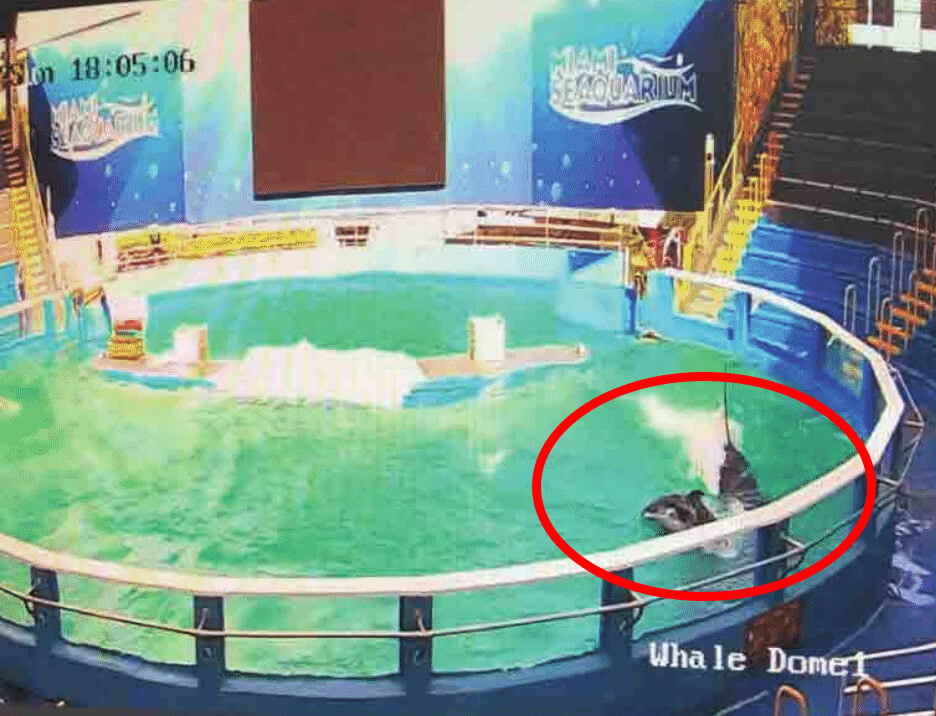 The Seaquarium’s notes from April 2021 reveal that two male dolphins undid zip-ties in order to enter the same pool as a female dolphin named Bimini and that they then attacked her. Bimini didn’t eat for two days following the incident. Nearly two months later, X-ray photos of her ribs indicated that she had incurred multiple fractures during the attack and had not received proper aftercare for her injuries. 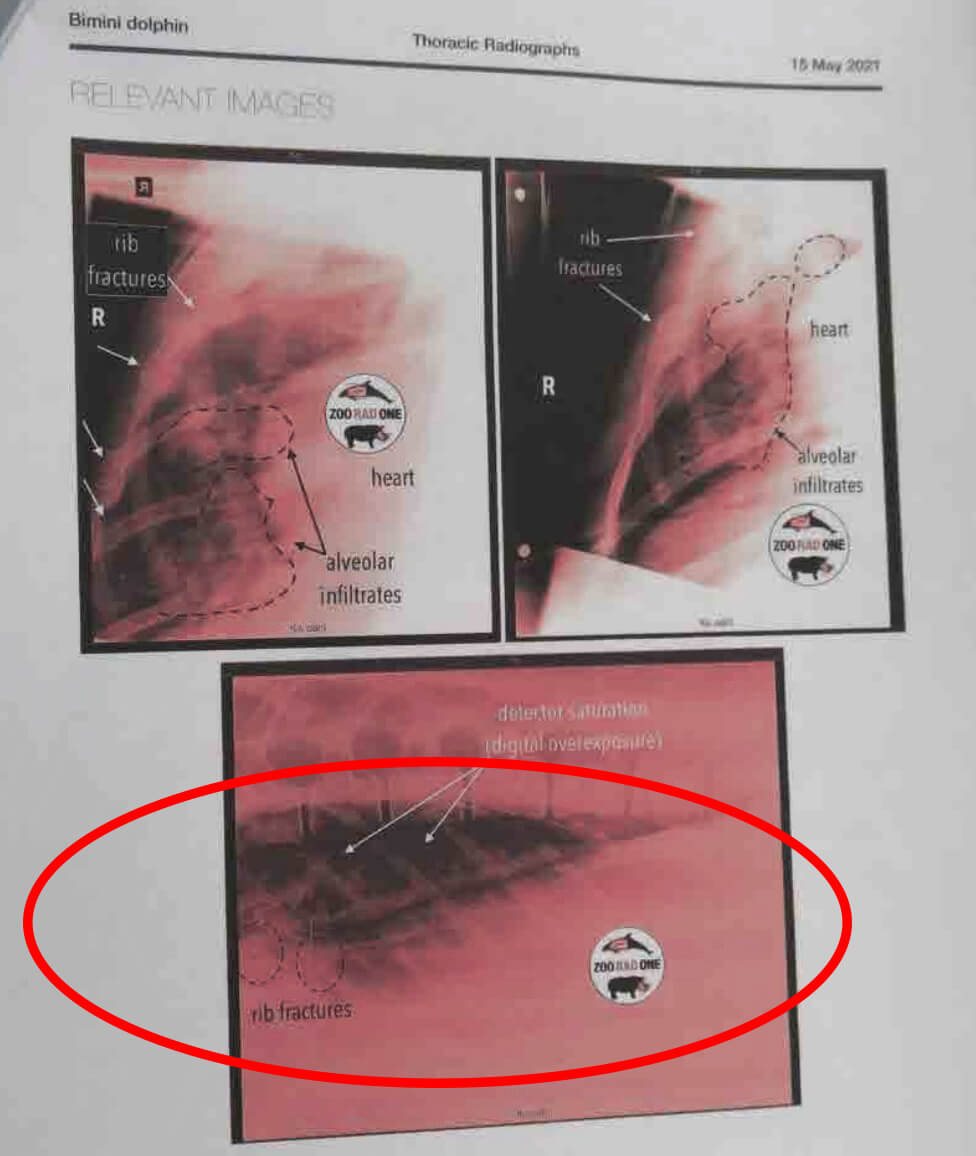 These were not isolated incidents. There have been a number of serious injuries from dolphin attacks over the past several years, some fatal. A total of six animals died in 2019 and 2020 at the facility. Among them were two bottlenose dolphins, Echo and Indigo, both of whom died from trauma-related causes. In January 2021, a female bottlenose dolphin, Sam, became bloodied and blind in one eye after an aggressive interaction with another dolphin. 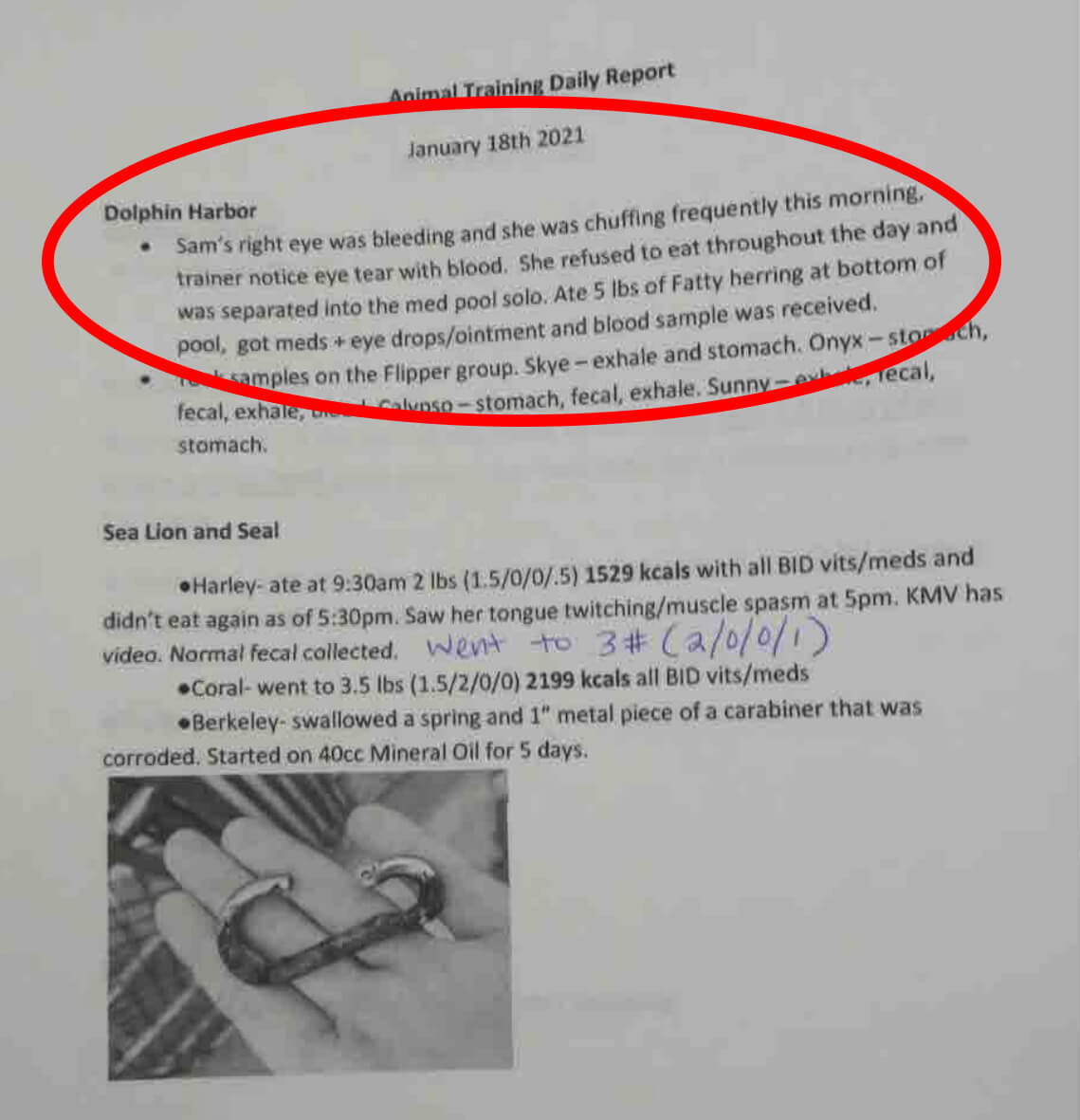 Despite these incidents of aggression between dolphins, at the time of the USDA’s inspection in June 2021, the Seaquarium “indicated that they do not have a way of tracking which animals are housed together on a particular day.”

The 2021 USDA inspection revealed that Seaquarium visitors were able to get close enough to Lolita’s tank wall to hold cell phones, cameras, and even small children over the edge, as the photo below shows. This ineffective barrier allowed guests to come dangerously close to Lolita and didn’t prevent objects from falling or being dropped into her tank. 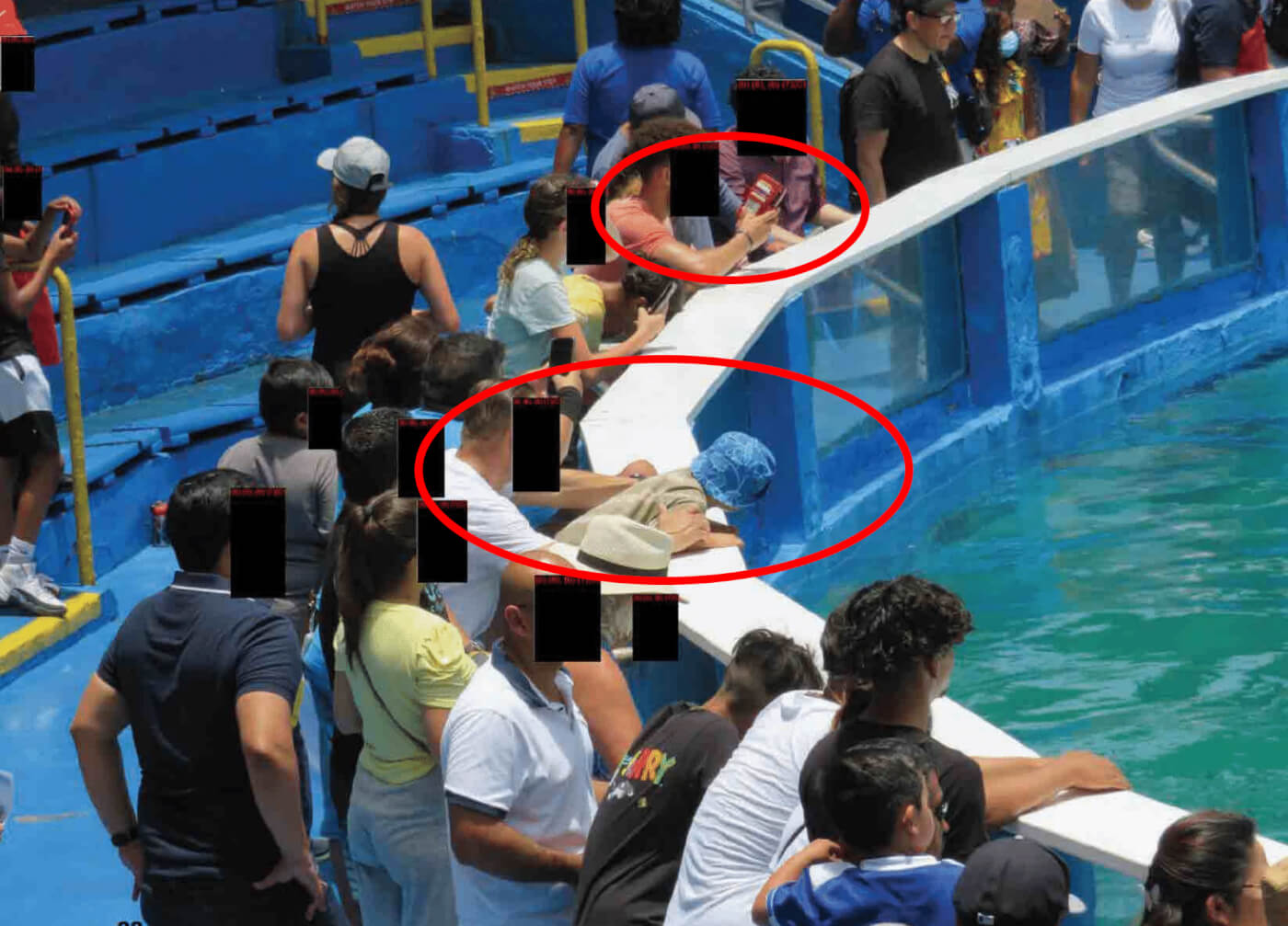 One person dropped a carabiner clip into the water, which a dolphin named Berkley then swallowed. 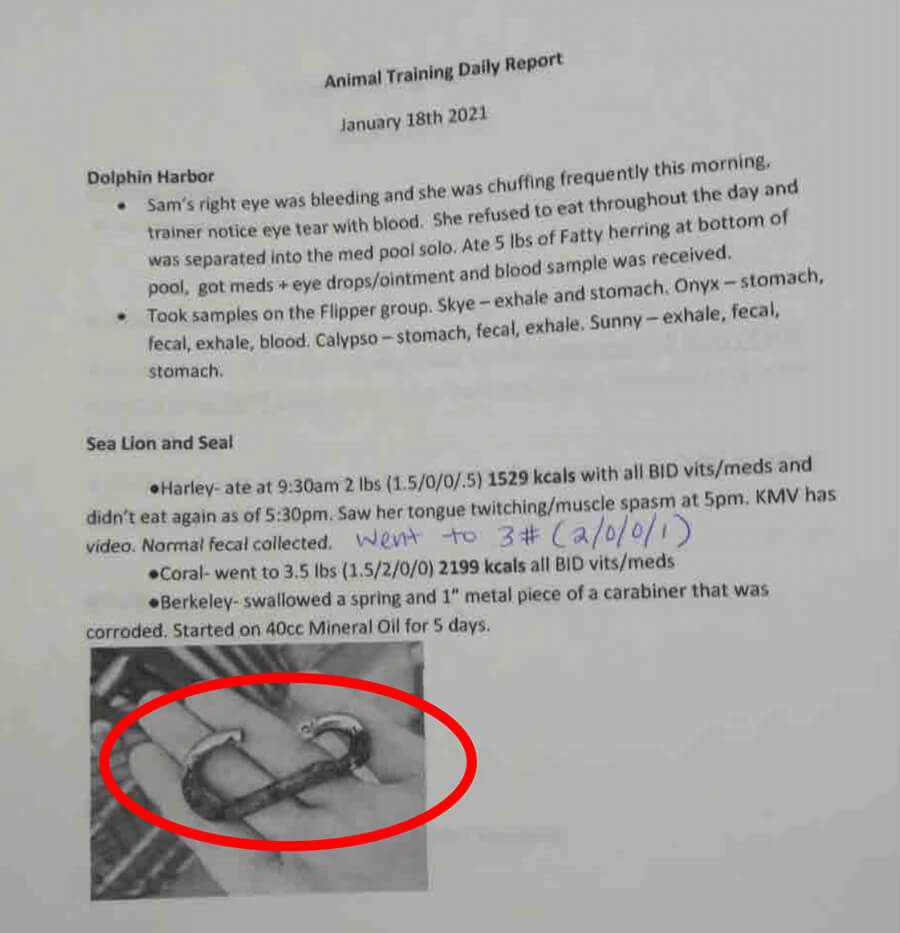 5. Lolita Was Forced to Perform Dangerous Tricks at the Miami Seaquarium Against Veterinary Advice

The video below reveals that Lolita was forced to perform fast swims and high jumps in her tiny tank—tricks that likely caused her to collide with the tank wall and injure her jaw.

According to the inspection report, the attending veterinarian then on site raised concerns about forcing Lolita to perform such tricks following her injury. But trainers at the Seaquarium disregarded veterinary instructions and continued to make her perform speed runs and multiple high-energy jumps.

Lolita performed for decades, typically two or three times a day, sometimes even when she couldn’t keep her eyes open or had just undergone invasive medical procedures. As of this spring, she is no longer forced to perform. Yet the long-suffering orca is still in the smallest orca tank in the world instead of at a seaside sanctuary.

The global calls to release Lolita (known to the Lummi Nation as Sk’aliCh’elh-tenaut) from the world’s smallest and oldest orca tank are stronger now than ever as the Miami Seaquarium’s failure to provide animals with even the bare minimum necessary for their well-being for decades has been exposed by PETA.

In the ocean, orcas can swim up to 140 miles a day and dive thousands of feet below the surface of their native waters. Holding them captive for human amusement is a form of speciesism—a human-supremacist worldview—and it must end.

Please politely urge The Dolphin Company, the owner of the Miami Seaquarium, to release Lolita to a seaside sanctuary.