Have you ever taken a turkey’s perspective into consideration when whistling your way through the holidays or the rest of the year? Known for being affectionate, intelligent, and charismatic, these birds so frequently used for food deserve freedom and compassion. Consider with us the many reasons to give thanks for turkeys and to keep them off your plate.

Perhaps the most striking characteristic of turkeys is courage, especially in caring for their young. In nature, mother turkeys bravely defend their babies from predators, prizing that bond even over their own life. Turkeys also prioritize the safety of their peers. Benjamin Franklin famously wrote of this virtue, bringing it to light for future admirers of the birds:

[I]n Truth the Turk’y is in comparison a much more respectable bird [than the Bald Eagle], and withal a true original native of America … a Bird of Courage.

It’s the opposite of courage to support confining, killing, and eating these benevolent birds.

Sanctuary caregivers have termed turkeys “natural detectives.” Spending even a short time with them reveals how observant and aware they are of the sights and sounds of their surroundings. Likely the avian answer to Sherlock Holmes, they often display exploratory behavior, ever keen to investigate undiscovered corners and forage for fresh food sources. Their sight is three times as clear as that of a human with 20/20 vision. They can see the full color spectrum and have a 270-degree field of vision.

Notable, too, is turkeys’ sensitivity, sometimes expressed through blushing as they become excited, agitated, or ill. This causes the skin on their head and neck to change hues, reflecting evolving emotional states. Whenever they have the good fortune to get their feathers stroked, they soak it up as a calming massage. Like cats, they even purr while being caressed and cuddled. Turkeys are also musically inclined and sensitive to melodies. They revel in listening to specific tunes and cherish clucking and chirping loudly along to favorite songs. 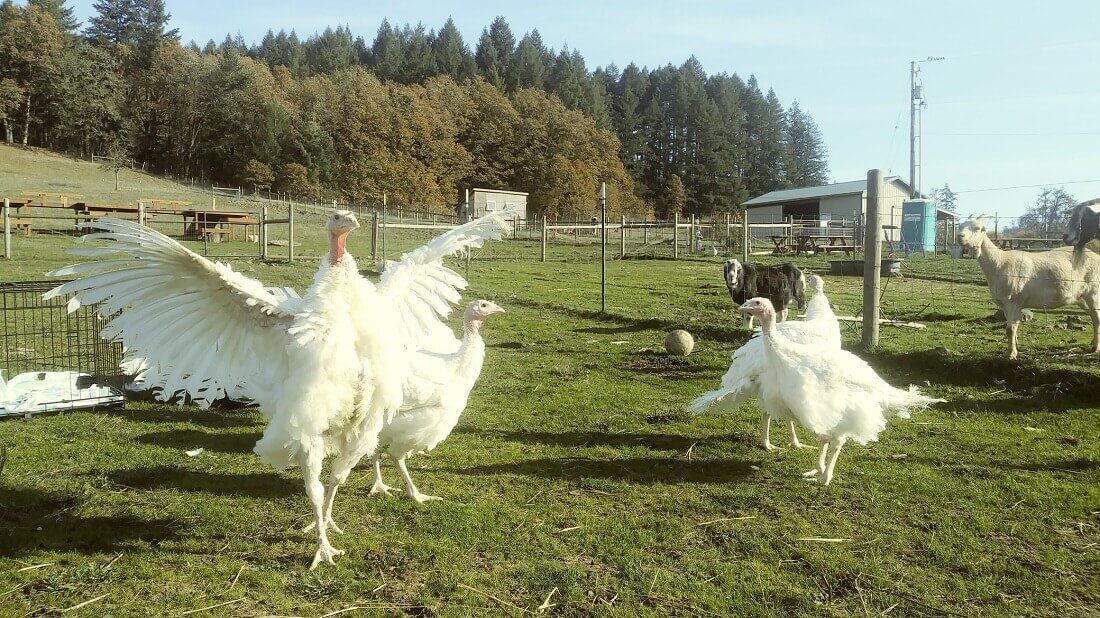 Playful and happy to see familiar faces, turkeys are sociable animals capable of forming meaningful friendships. Feeling close to others is fundamental to them.

Each turkey has a distinct personality, and they love to interact and play games together. If an apple is tossed into their midst, a flock is likely to bounce it about like a soccer ball.

Flirting and courting games occur regularly, too. The longer a male turkey’s snood (the dangling appendage on his face), the healthier and more desirable to potential mates he is. Males also allure females with colorful flaps of skin on their necks called wattles as well as with tufts of beard-like hair that extend from their chests.

In their natural habitat, these birds sleep in trees as a group for protection. Then in the morning, they conduct roll calls via quiet yelps to ensure that everyone is safe.

Although turkeys used for food have been genetically manipulated to weigh far more than is natural, those in nature prosper by staying active: running at rates of up to 35 mph, flying at up to 55 mph, gobbling up fruits and vegetables, preening themselves, stretching their wings, taking dust baths, tending to their young, building nests, and climbing high up into trees to roost. They thrive on these routines of motion and deserve the natural liberty to do so.

Appreciating their array of unique qualities prevents people from thinking of turkeys as food.

Every year in the U.S. alone, a staggering 300 million turkeys are raised and killed for their flesh. Of those, more than 45 million are slaughtered for Thanksgiving and more than 22 million for Christmas. The natural life expectancy of a turkey is 10 years, but most used for food don’t make it past 5 months. That means nearly all those used for food are infants.

Since they can no longer mate naturally due to their size, turkeys are held down by workers and forcibly inseminated. After the chicks hatch, the ends of their beaks and toes are cut off without painkillers. Then they are crammed into filthy sheds, often become crippled by their own weight, and likely punched, kicked, stomped on, and thrown. Those who become too sick or injured to live through transport are slammed against walls or strangled until dead. The rest are shoved into crates on trucks bound for a slaughterhouse. The ride takes hours, often in extreme weather, and the birds are given no food or water. At the slaughterhouse, the survivors are hung by their weak or broken legs, dragged through electrified “stunning tanks” that immobilize them, cut through the neck, and dumped into a large vat used for feather removal, sometimes while still alive. These horrors are nothing to be thankful for.

The fortunate few rescued from the massive machine of speciesism may find their way to a loving sanctuary where humans help turkeys heal and live peacefully. Among other animals restored to a more natural state, the birds begin to flourish and form social groups meaningful to them. Their personalities can emerge and blossom, and any visitor patient enough to observe and appreciate them for a bit will wonder how turkeys are ever viewed as food.

What You Can Do for Turkeys

As many of us gather to express gratitude for the blessings in our lives, we ought to consider turkeys’ lives, too. Rather than making them centerpieces of your table, try centering turkeys in a new, compassionate light within your heart this holiday season and all year round. Visit a nearby, reputable farmed-animal sanctuary that genuinely cares for them if you can, and connect with these remarkable birds. Then when planning upcoming meals, it will be a breeze to make vegan choices using our free vegan starter kit: