Lolita the orca is still being held prisoner in the world’s smallest orca tank, at the Miami Seaquarium. She was taken from her pod in the ocean over 50 years ago and has lived without the companionship of another orca for over 40 years, since her tankmate, Hugo, died after repeatedly bashing his head into a wall. Despite knowing that Lolita is languishing at the Miami Seaquarium, the Florida Attractions Association, the Greater Miami Convention & Visitors Bureau, and the Greater Miami Chamber of Commerce still sponsor the park.

Lolita is now around 56 years old. If she were a human, she’d be preparing for retirement. While many senior citizens in the U.S. move to Florida to enjoy their retirement years, Lolita has been imprisoned in a tiny tank there for 52 years. Please speak up for her today—she needs to enjoy the last years of her life at a seaside sanctuary. 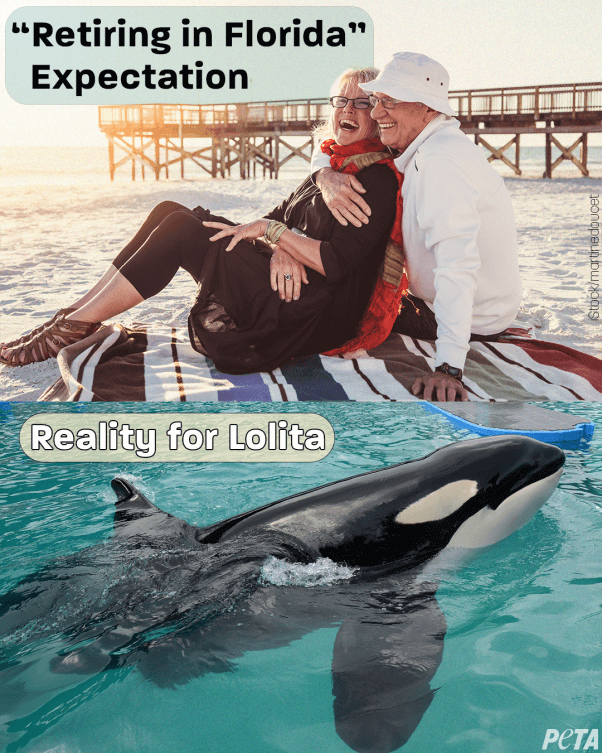 Take the steps below to tell the Miami Seaquarium’s sponsors to end their business partnership with the abusement park and to use their influence to urge The Dolphin Company to move Lolita to a seaside sanctuary.

2. Call the Greater Miami Chamber of Commerce at 305-350-7700 and politely ask it to end its business partnership with the Miami Seaquarium. Let it know that Lolita has been suffering in the world’s smallest orca tank there for over 50 years.

Note: Please call during business hours, which are Monday through Friday from 8 a.m. to 5 p.m. ET.

Let Us Know How Your Call Went

3. Use the Greater Miami Convention & Visitors Bureau’s contact form to tell it that the Miami Seaquarium isn’t a tourist destination—it’s a prison that has been holding Lolita the orca captive for over 50 years. Ask it to stop endorsing the cruel park:

4. Send an e-mail to the CEO of the Miami Seaquarium’s owner, The Dolphin Company, asking it to release Lolita to a seaside sanctuary.