Deb Suchman launched Polkadog Bakery in Boston’s South End in 2002 . The brand has grown into a globally accessible brand through retail distribution from Seattle to Puerto Rico and New York to South Korea . Suchman: “This is my life: family, work and community. It’s all part of the same thing” 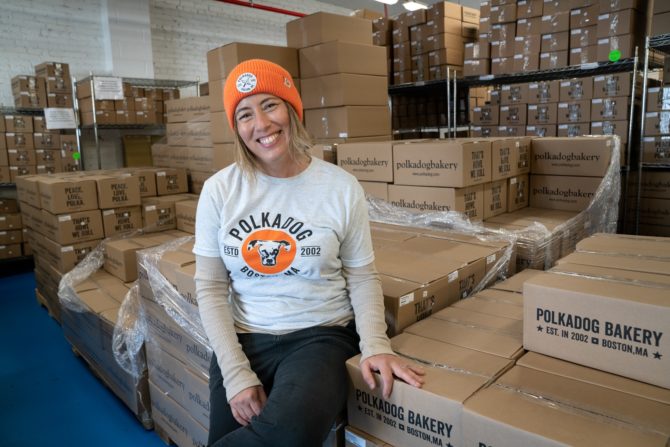 Starting in Boston’s South End with one retail storefront, Polkadog has maintained its hometown roots since Deb Suchman launched the brand in 2002. It’s been a successful trip for Polkadog, which has grown into a globally accessible brand through retail distribution from Seattle to Puerto Rico and New York to South Korea. Pet Age recently spoke to Suchman, to learn what makes the brand so successful in the crowded pet treat market.

What motivated you to start Polkadog Bakery?

I had just moved to the South End in Boston — right after graduating from college — and I fell in love with the neighborhood. Even though it was a big city, everyone knew each other. My neighbors were living, working and playing in overlapping shared space, and I wanted that. I wanted to take something from it as well as give something to it.

When we began the Polkadog journey 20 years ago, we were making treats ourselves in a tiny studio apartment for a one-eyed rescued pup named Pearl. These were truly homemade treats, and it was a good story that felt right. Even now, with many stores around the greater Boston area, and an industrial kitchen in the heart of the city, Boston Fish Pier, we still make Polkadog treats ourselves. We still partner with our neighbors because we work and live here. We’re still taking and giving. That was the idea, and it still is.

What’s important to you in terms of sourcing, production, and packaging?

Polkadog has a lot of moving parts, but for me it’s knowing the people who we work with, their businesses and what they do. For example, in August we are launching a single-ingredient pork jerky treat, and we’re working with our neighbor, Walden Local Meat, to do so. They have a shop that’s literally four blocks away from our first store in the South End. All their meat comes from small local farms around New England and New York and is always pasture-raised. They know the farmers. That’s how I like to work. Our pouch packaging comes from people I know in Hyde Park. The designs for much of our packaging are created by a graphic artist, the drawings by an illustrator — all the people we know from living and working here.

How does community play a role in your relationship with vendors?

It’s all one and the same. Our kitchen is located at Boston Fish Pier. The fish trucks from New Bedford are coming in every week. Knowing our venders means we know who maintains sustainable fishing practices. It means we can partner with like-minded businesses committed to healthy ingredients, to avoiding waste and to humane and earth-friendly farming. We’re part of every step along the supply chain of ingredients. We’re even working with local multi-generation processors on the Boston Seafood Festival right now. This is my life: family, work and community. It’s all part of the same thing.

How have you managed to increase production to meet the growing demand for your treats?

Keeping ahead of demand is no joke, but it’s a good problem to have. We moved into our new Fish Pier kitchen in 2019 and by the last quarter of 2021, we already needed to expand our oven room. So, we built another one, and a new additional facility to help with packaging and shipping. We’re thinking about dredging part of the shoreline to build a floating Polkadog bubble island — haven’t heard back from Massport, though.

How has Polkadog changed since launching in 2002?

Polkadog is pretty much the same as it was 20 years ago. Except now, we have eight stores in different Boston neighborhoods, an industrial kitchen at Boston Fish Pier and a warehouse in Canton. We have also grown to 95 employees. And if you take out your iPhone and open Instagram, you can see pictures of Polkadog Cod Skins on shelves in Seoul. If, like me, you’re not too tech savvy, and can’t keep track of all the new apps, you can ask my son, Max, for instructions.