Eric Tolbert, a sheriff’s deputy in Rockdale County, Georgia, admittedly left his three American bullies—Luke Cage, Storm, and LaLa—to die of heatstroke over the course of two days in June when temperatures reached a sweltering 95 degrees. Then, as he told one of the sheriff’s office investigators, he “trashed ’em,” and the decomposing remains of two of the dogs were found in garbage bins on his property. Now, following three months of action by PETA, during which we sent letters, held demonstrations, and encouraged supporters to take action, Rockdale County District Attorney Alisha Johnson has finally charged Tolbert with cruelty to animals.

These dogs depended on Tolbert for protection, but he left them to suffer and die. Breathing-impaired breeds (BIBs) like American bullies are twice as likely to experience heatstroke as other dogs. Tolbert kept Luke Cage, Storm, and LaLa crated without adequate ventilation in a squalid outdoor shed, where the walls were stained with urine and moldy feces had piled up beneath the crates. After the first dog died, Tolbert couldn’t even be bothered to keep the other two safe indoors. Instead, he left them in the shed while he went to work the next day, and they died, too.

At the time of their deaths, Tolbert was a K-9 handler for the sheriff’s office. Investigators found his assigned K-9 partner, a black Labrador retriever named Aegis, along with another dog, apparently a pit bull owned by Tolbert, kept in squalid, feces-littered pens with dirty water buckets. Although Aegis was removed by county officials, the other dog was not. His condition and whereabouts are currently unknown.

Following a thorough investigation, the sheriff’s office demoted Tolbert from his position as a K-9 handler, and while nothing can be done to truly get justice for Luke Cage, Storm, and LaLa, the three counts of felony aggravated cruelty to animals and two counts of misdemeanor cruelty to animals against Tolbert is a massive victory. Thank you for taking action to ensure that he’s held accountable for the suffering of his dogs and for helping to prevent others from being abused. 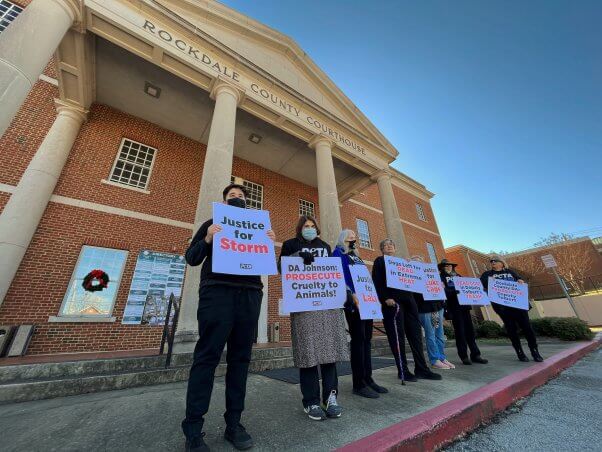 Humans breed BIB dogs like Luke Cage, Storm, and LaLa to have certain physical traits, to the detriment of the dogs’ quality of life. Breeders and sellers know that flat-faced dogs will suffer but still exploit them for profit.

The solution is simple: Bulldogs, other BIBs, or any dogs should never be bred or purchased. All “purebreds” (flat-faced or not) suffer from congenital and often painful conditions. If you have the time, money, patience, and love to care for an animal for life (which could be for more than 15 years), please adopt one from a shelter. If you already have a BIB dog, please commit to making their life as fulfilling, healthy, and comfortable as you can—but pledge never to buy another one.